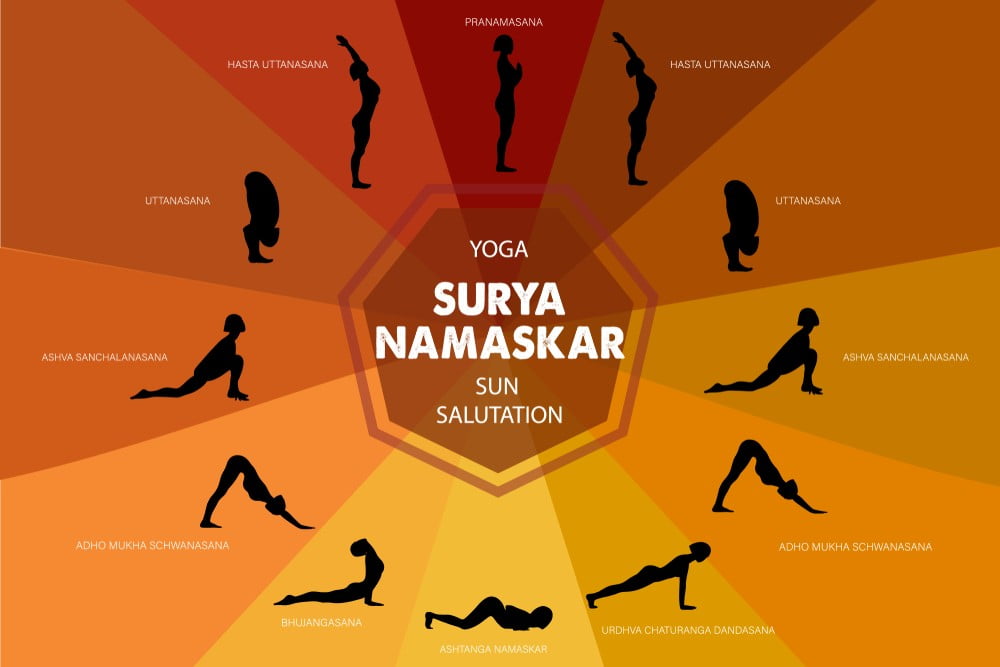 What Is Surya Namaskar?

Surya Namaskar is composed of two words in which the Surya means the Sun. Namaskar means bowing or praying. That is why, since ancient times, people wake up in the morning and pray before the Sun.

The process of this yoga is completed in 12 phases and a separate posture is practiced at every stage. Thus, we can say that a systematic series of 12 yoga postures in the same yoga is called Surya Namaskar, which provides many health benefits along with spiritual and mental benefits.

Science Behind The Surya Namaskar.

By the ancient sages of India it is said that, various organs of the body are governed by various gods (divine sensations or divine light). The Manipura Chakra (which is also the center of the human body located behind the navel) belongs to the sun.

Steps To Do In Surya Namaskar.

Here, we will tell you the steps of Surya Namaskar, through which you can easily practice in regular basis.

First of all, lay a yoga mat and stand upright. Now, connect both hands and bring it closer to your chest and come to the position of salutation.

Now take a deep breath and connect the hands and lift it over the head. Keep in mind that, in this situation both sides should keep touching your ears. Now, try to move the upper part of the body backwards as much as possible, keeping the lower part of the waist straight.

While exhaling, now gradually bring both hands forward and bend the abdominal force forward and try to put both hands on the ground. Keep in mind, in this case, your forehead should touch the knees of the feet.

In this posture, you have to exhale and move the left foot backwards. After the claw of the left and right foot comes parallel, try to lift the body from the middle and let the palms and toes be adjacent to the ground. Keep in mind, stay your hands and feet straight in this situation.

Now, take a deep breath to change from Parvatasana to Ashtangasana. Then put both your knees on the ground. Thereafter, touch the chest and chin to the ground without breathing. The waist and hip will be raised up in this posture.

Try to lift the upper part of the waist in this posture without breathing. Keep in mind, in this situation, the palms should remain adjacent to the ground.

Thereafter, you have to again come back to the mountain pose. Try to lift the middle part of your body while breathing. Keep in mind that while doing this posture, do not turn your hands straight and try to touch your additives on the ground. Also try to look at the navel.

Now take a deep breath and take your right foot forward and sit on it. Keep the left foot straight and touch the knee with the ground.

Exhale and bring your left foot forward. Now straighten the legs while keeping your hands on the ground and try to touch the forehead with the knees.

Now take a deep breath and lift the hands upward and try to bend backwards as much as possible by connecting the palms together.

Finally, you have to come back to the bow posture. For this, you should be very straight and come to the position of salutation by connecting hands.

The positive health effects or health benefits of Surya Namaskar are;

Research conducted by the International Journal of Yoga mentions that Surya Namaskar also exhibits a positive effect in reducing weight with maintaining cardiovascular health and respiratory health. It would not be wrong to say that, regular practice of Surya Namaskar can prove beneficial for those who wish to lose weight.(1)

Respiratory pressure is directly related to pulmonary function. This process of yoga consists 12 different yoga postures, which are practiced under 12 phases, in which the process of inhaling and exhaling plays an important role.

Therefore, it would not be wrong to say that, Surya Namaskar can prove to be helpful in controlling respiratory pressure.

Surya Namaskar consists 12 systematic yoga postures. Doing these postures has an impact on every part of the body. At the same time, inhaling and exhaling at every stage during this process is especially helpful to boost the activity of the lungs.

So, it can be said that Surya Namaskar can prove to be helpful for pulmonary function (lung performance).(3)

Apart from the physical benefits Surya Namaskar also have various mental benefits. Its regular practice helps to remove the presence of toxic substances from the body by improving the performance of all the mechanisms of the body.

Meanwhile, it also soothe the mind by removing anxiety.(4) For this reason, it can be said that the regular practice of Surya Namaskar can help to keep the mind calm by removing mental problems like stress and anxiety.

Regular practice of Surya Namaskar provide overall physical strength. In fact, the different stages adopted in this yoga have a favorable effect on the muscles associated with different organs of the body.

Its can improve the performance of the muscles by increasing their activity and gradually strengthening them. So, it can be said that regular practice of Surya Namaskar can increase the body’s ability to function by strengthening muscles.(5)

It also beneficial in the problem of irregular menstrual cycles, as well as to address problems during the menstrual cycle such as fatigue, body aches, stress and irritability. According to experts, regular practice of Surya Namaskar helps to relieve many physical problems.

These problems includes improving the process of regular menstrual cycles. It would not be wrong to say that Surya Namaskar can show a positive effect in maintaining the continuity of the menstrual cycle.

7. Beneficial for Skin and Hair.

Anxiety and stress are considered to be the main causes of many body-related disorders, including skin and hair problems. According to experts, yoga is an action that can help to keep the mind calm by removing anxiety.

For this reason, it can be assumed that regular practice of 12 yoga postures in different phases under Surya Namaskar can help to relieve many skin related problems such as strengthening of hair by eliminating problems like anxiety and stress.

If you are going to practice Surya Namaskar for the first time, you must taken into account the following few things to get the maximum positive health effects;

Why Should Children Do Surya Namaskar?

Surya Namaskar calms the mind and enhances concentration. Nowadays, children face great competition. Therefore, they should do a routine Surya Namaskar because it increases their stamina and reduces the anxiety.

Regular practice of Surya Namaskar increases the strength and reduce the age signs. It is the best muscle exercise which increases the flexibility. Children up to 5 years must do in regular basis.

Why Should Women Do Surya Namaskar?

It is said that Surya Namaskar can do what cannot be done with a balanced diet of months. It is a boon for health conscious women. This yoga helps to burn excessive calories and provide you the right size without any expenses.

Postures of Surya Namaskar stimulate several glands, such as the Thyroid gland (which affects our weight) by increasing the secretion of hormones and helping to reduce excessive abdominal fat.

Regular practice removes the irregularity of women’s menstruation and also effective during childbirth. At the same time, it helps to prevents wrinkles and keep you young.

Before practicing Surya Namaskar, you should pay special attention to the following;

1. Is Surya Namaskar better than walking?

2. How much weight can I lose by doing Surya Namaskar?

Surya Namaskar is effective for reduce weight. If this yoga is accompanied by proper diet, about two to three kilos of weight can be lose in three to four months.

3. Can Surya Namaskar be performed anytime?

Yes, Surya Namaskar can be performed at any time. However, it is most effective on an empty stomach in the morning.

4. Should Surya Namaskar be done fast or slow?

5. Is Surya Namaskar has a positive effects to reduce breast?

There is no clear scientific research available on whether the breast can be reduced with the help of Surya Namaskar. However, according to a scientific study, this yoga can reduce body fat. On this basis it can be said that Surya Namaskar can also help to reduce the breast.

If you are also impressed by the positive health effects of Surya Namaskar and thinking of practicing it regularly, it is better to first read all the important things in this article. Also, if you have any questions or suggestions related to this topic, you can reach us through contact us.

How to Mix Protein Powder Without Lumps in 5 Easy Steps

Archer Push Up : Benefits And How To Do?